Here Is The Story Of Being Bogged On The Beach….

At 8.30am we drove out of Bondi in a Pajero filled with Books, Blankets and Blue Cantrell. We drove fast. Got the hell outta there! This time around it was so much colder than we remembered. Faces were Sour. Friends were Strangers. And the sushi sucked.

It is the mecca of paradoxes! The most colourful of clothing and darkest of hearts. Truly truly amazing.

The road trip began! The sun was up, the windows down. Rachel fell asleep. I told Mum I was moving to France. She started planning. We sang to Ron Pope. The coast line offered possibility after possibility. Houses for sale. Paddle-boards to rent. We crossed a river on a ferry. Next to a man on man-made motorcycle. We payed $3.10 and threw out our mcflurry plastic.

“Girls, so this is the North Shore. We can drive to Plommer on the beach. We have to be quick though the tide is coming in.”

The beach was amazing. It was Natadola with City Lights on the horizon. It was long and white with perfect swell. We were squealing. Our eyes glued to the aqua and whitewash. Rachel wanted to get in the water. Be careful what you wish for girl.

We got out into the freezing breeze and through our giggles dug around the rubber. Rachel collected the wood. I made the ramps. Mum revved the engine. We went backwards. The back tyres went into the waves. We were stuck.

The sun was going down. I googled the tides and quickly discovered that we were running out of time. We called a friend. He gave advice. We tried and failed. We knelt down in the water and dug our little hearts out. We dug until it was dark. I think we gave up at around 7.10pm. That was after fake diamond rings had been used to release valves, girls had been used as counter weights, our denim was soaking and our car was officially surrounded by water.

So the unpacking began. I had to let my books go. Good books too. The History of Everything. Heath Ledger Biography. The Pressed Fairy Book. We were only able to save the necessities. Passports were found. Boots. Skateboards. A big doona. Phones. My hair brush. A few bags of clothes. The big Toshiba Torch.

We sat on the hill, shared a mandarin, and watched the car go down. We were laughing for the most part. There were a few tears, understandably.

By about 8pm we saw headlights. They were coming fast. By five past 8 there was a Ute. Screeching up to us. Two fishermen and a white ute. An Aussie girls version of Prince Charming on a Stallion. They told us to stand back and mucked around with a long rope. They yelled things like “Now Ronnie Now! Give ‘er more mate!!!” Before we knew it the car had literally bounced out of its hole. Amazing.

We jumped around and the squealing began again. This time not for the Australian landscape but for the amazing people who populate it. For the man who had sent them, for the men who had set out to find us. They weren’t wearing the fanciest of jackets, or dining in the trendiest of cafes, but around that big metal bin, lit on fire, with bourbons in their hands and chuckles on their faces, they were a lot prettier and more alive than anyone we had come across on the other beach. Famous and far far away.

MORALS OF THE STORY: 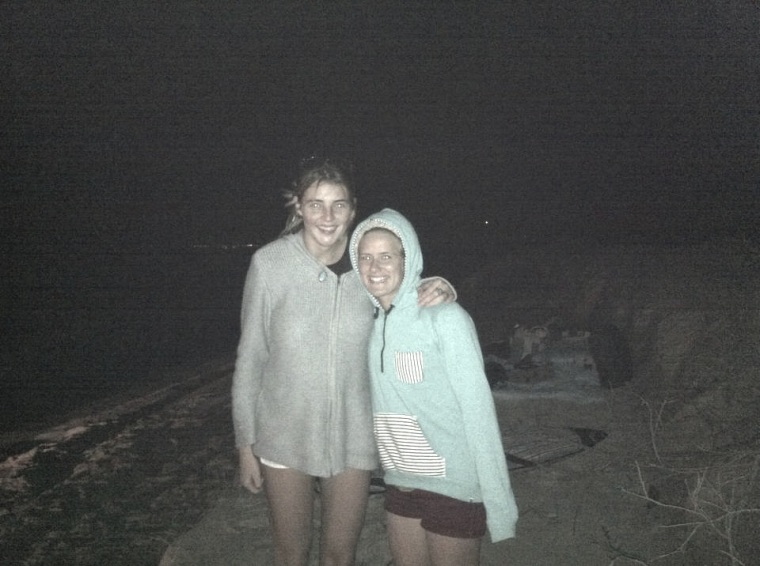